"THE INVISIBLE FOREST"
A Theatre of the Unconscious
Film review by Cedrus Monte; Zurich, Switzerland. 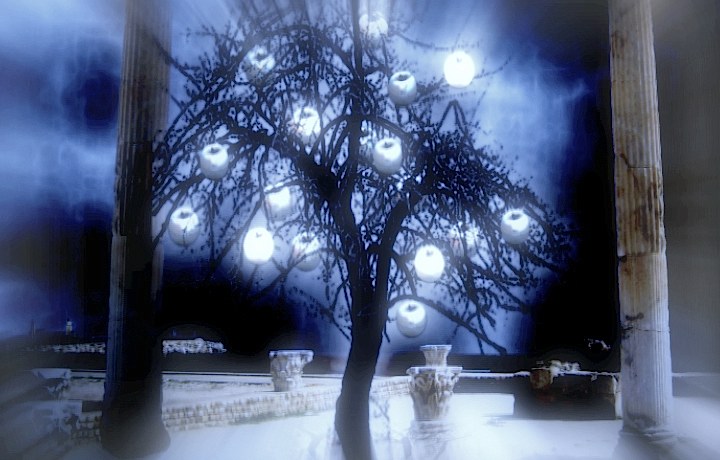 The imaginal fruit of the Silver Apples in "The Invisible Forest"

The Invisible Forest, Antero Alli’s most recent film, coalesces Alli’s own artistic raison d’etre with the work and vision of Antonin Artaud (1895-1948), French playwright, poet, actor and director. Artaud was initially associated with the Surrealists of the 1920’s, but his growing insistence on imagination as reality, rather than a mere image-maker of reality, gradually set him apart.  For Artaud, dreams, thoughts and hallucinations were just as real as the outer world of the concrete. In bringing dreams and hallucinations to center stage, Artaud’s theater became, from a Jungian perspective, a theater of the unconscious.

In filmmaking, Antero Alli, playwright, poet, actor and director, is a Pied Piper of the imagistic, imaginal world, enchanting, enticing, with the mercurial, quicksilver flute of his instinctive, intuitive style. Perhaps this is especially true in The Invisible Forest.  Indeed, we are introduced to the story by observing, from a not-too-distant hillside, a band of enigmatic characters walking in procession, in muted merriment and sure-footed intention.  They are on a footpath leading into the forest, clothed in the dress and drama that invoke the realms of myth and magic.

Entering the forest, Alli signals to us that our encounter with the Great Unknown is at hand, the mythic journey is about to begin.  Along with the merry band of characters, we too are eventually led deep into the forest where much of the story unfolds.

In fairytales, the forest can be understood as many things - an image of the unconscious, a place of testing and initiation, the realm of symbolic death. Forests embody threshold spaces where we encounter the spirits of nature as well as ghosts of the psychic, para-spiritual world. It is here in the forest that Alli’s dreamstory begins and winds itself through a rich tapestry of labyrinthine dreams, dreams within dreams, dreams that eventually carry us through to the shattering and regenerative conclusion of Alli’s cinematic opus.

At the conclusion of The Invisible Forest, all dreamthreads converge, yet bring us beyond finality or conclusion. We are led, rather, to a psycho-genesis of the mind, a place where new life and vision begin. At the end of the story, the main character, Alex, (played by Antero Alli) finds himself in the subtle-body realm of the dreamworld, that reality that is simultaneously spirit and matter, a reality that is understood and engendered by aboriginals and alchemists alike. Precipitated by several sessions with his psychotherapist trained in aboriginal dream-stalking, Alex finally meets (in the reality of the subtle-body dreamworld) the central and haunting character in all of Alex’s dreams.

Alex finally meets Antonin Artaud, or rather the guardian of Artaud’s mind. 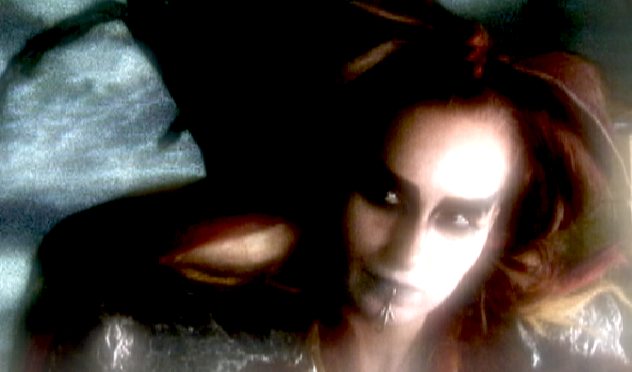 Clody Cates as "Keeper of the Mind of Antonin Artaud"

The guardian is played by a woman (Clody Cates), seductive, fierce and fragile. From a depth psychological perspective, Alex encounters what might be understood as Artaud’s anima, that contra-sexual energy which animates and fosters a man’s creative impulse and life.  Alex meets her and is ignited by the ferocity of her wisdom, an unrelenting, demanding, consuming and radiating force.  One can sense this energy in Artaud's own writing about art and theater:

The belief in a fluid materiality of the soul is indispensable to the actor’s craft. To know that a passion is material, that it is subject to the plastic fluctuations of the material, makes accessible an empire of passions that extend our sovereignty.

Alli’s deft and mercurial blending of images and spontaneous, non-scripted text (with the exception of passages from Shakespeare and writings by Artaud) is supported into a level of artistic excellence by the exceptional talent and performance of every actor in the film. Worthy of special mention is the musical score written, composed and performed by Sylvi Alli (who also plays one of the Lunar Muses). At each turn in the labyrinth of images, her music reflects the pathos, mythos and mystery of The Invisible Forest.

Cedrus Monte, PhD dipl., is a Jungian Analyst, graduate of the C. G. Jung Institute in Zurich where she currently lives and practices. As a member of the Jungian training program in Zurich, the International School of Analytical Psychology (ISAPZurich), she lectures and gives workshops throughout the year. Her practice focuses on a somatic and imaginal approach to working with the unconscious. 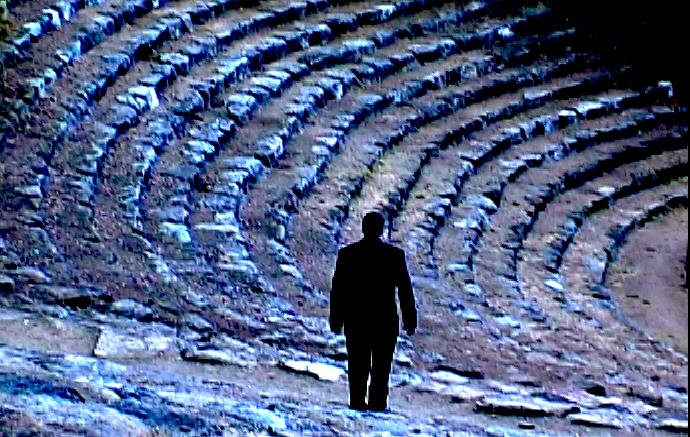 Interview with Alli on "The Invisible Forest"
by Juanita Benedicto. April 29, '08.