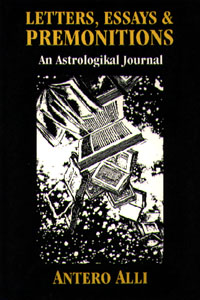 LETTERS, ESSAYS & PREMONITIONS: An Astrologikal Journal by Antero Alli. (Preface by Tim Lyons. Artwork by James Koehnline. 131 pages. Paperback. Limited First Edition. Published by Vigilantero Press in 1993). This book features 22 essays of 11 astrologikal ruminations and 11 sociocultural commentaries. The astrology includes his "Letters to a Young Astrologer" (Chart interpretation, 12th House, Uranus, and Neptune) plus articles on Jupiter, the Anti-Astrology Bias plus Uranus, Neptune and Pluto transits and, much more. Additional commentaries also include Antero's reflections on socio-political, economic, and political trends and excerpts from his Editor letters from his Seattle literary newspaper, Talking Raven Quarterly.

The premise of this book is to incite, in the imagination, a series of tiny riots when using the language of astrology. Why?! To encourage a shift from mere understanding of our world to the ever-changing dynamics of re-imagining the world as we know it. I believe this shift is primarily linguistic; the way we relate to language. Astrology, for me, is an eloquent language for articulating -- and sometimes predicting -- movements in the forces of nature, in individual psyches and collective gestalts. - Antero Alli

ASTROLOGICAL SERVICES AND WRITINGS BY ANTERO