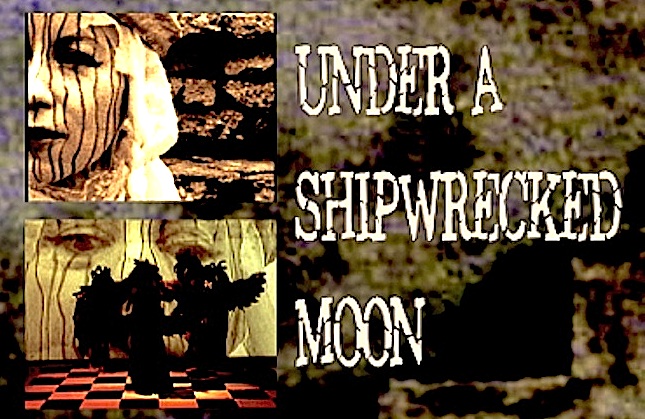 In “Under a Shipwrecked Moon,” filmmaker Antero Alli presents the classic mythic tale of a hero on a vision quest, but places it in a naturalistic setting where the fabulous and the visionary is seen as a part of everyday life. Jari Hietanen (in a passionate and precise portrayal by Gabriel Carter) is a young Finnish immigrant to America, whose sea captain father died in a shipwreck when Jari was a young boy. Jari’s grandfather Esko told Jari (just before disappearing from his life) that he was descended from a long line of shamans from the indigenous Sami tribe, and Jari has been using this information to invent a series of rituals. He uses loud punk music, drugs, and special masks and other ceremonial objects to propel himself into a visionary, dreaming state, seemingly with great success. He hopes he can connect to his father’s spirit. Meanwhile, Esko has reappeared in his life after 15 years, turning up in a coma at a local hospital. Jari understands that Esko is also traveling through the astral plane in his comatose state, since the two of them apparently have the ability to enter into each others’ visions. The film weaves back and forth between the metaphysical journeys that Jari and Esko undertake in their minds, and the mundane world where Jari, his wife, his mother, and his great Uncle Oscar try to figure out what to do about the reappearance of the unconscious Esko. Esko has prepared powerful surprises for the family, and the scene where these play out is a delightful and strange resolution to the film’s themes.

The movie is tightly plotted enough so that the viewer is in constant suspense about the mysteries which Esko is hiding. Felecia Faulkner does a fine job breathing life into the character of Jari’s mother: a woman who is given only two characteristics, her devotion to the memory of her husband and her fear of traffic jams. (These two traits are referred to relentlessly whenever she appears in the film.) Clody Cates and Alan Reade create strong, highly individualized portrayals of two nurses who take an unusual level of sympathetic interest in Esko. Alli’s wife and frequent collaborator Sylvi Alli composed and performed the rich, hypnotic score for the film, and she is also unforgettable in the key role of Jari’s dead grandmother, a shaman who is the principle guide in his visions.

Lea Bender gives a powerful performance as Jari’s wife. We first see her in a boutique where she is co-owner, and there are several riveting scenes where we discover the depth of her tenderness and loyalty to her husband. (We never find out if Jari has an occupation apart from conducting private rituals.)

Special effects artist Michael McWhirter has created outstandingly rich, surprising, and expressive visual textures for the “vision” sequences. These scenes use a variety of performance techniques such as puppetry, masks, and dance. They are in an inventive combination of visual styles, looking at times like a psychedelic music video, a home movie, a silent era comedy, or a vaudeville routine. This stylistic variety is a powerful metaphor for the “show” which our brains put on for us in our dreams, by turns funny and menacing.

The Hietanen family are as alike as peas in a pod. Jari, his mother, and his grandfather all fall in love with one person with an unbreakable loyalty. In Jari’s visions, the Heitanen clan is seen as a family of dice throwing ravens. The three of them do seem to be addicted gamblers, playing high stakes games with reality. His mother, who moved with her young son to an unfamiliar life in America, may have taken the biggest gamble of all. Even Esko’s brother Oscar, who seems to be the black sheep of the family, is given to playing games, since he and his brother equally accuse each other of mishandling the money from their export business. Like Jari, filmmaker Alli grew up without a father, indicating that this is a very personal film for him. And like Alli, Jari is equally in search of his father and in search of his Finnish roots, a search for cultural meaning which is common among immigrants. For inspiration, Jari reads from the Kalevala, the Finnish national epic poem. The passage he reads deals specifically with the alienation experienced by an exile.

Alli has a fine knack for visual storytelling; he uses unusual camera angles in a way which is unobtrusive, yet subtly heightens the drama at all times. Apart from the “vision” sequences, the visual style of the film is realistic, providing highly detailed settings, for example, for Madeline’s boutique or the hospital room. But the dialog is often metaphorical, poetic, and delivered with operatic slowness, giving us ample time to hear the echoes in the language. The style could be described as a kind of fabulist realism, and the overlap of the dream world and the waking world becomes a major stylistic feature. Esko dreams of a rowboat, and the reflections from the waves are seen on the real hospital walls. The figures gathered around his hospital bed are also seen projected onto different surfaces in his dream landscapes. As Jari says, Esko lives “in a crack between the worlds.”

Alli has created a film world where dreams and visions intersect with ordinary life at many points. The visions provide a metaphorical guide to the forces which are the underpinnings of life’s dramas. In doing so, he enables the viewer to build a bridge between the quotidian and the visionary, the living and the dead.

Antero Alli, Finnish-American independent film-maker, has just produced his first full-length feature film with a Finnish theme: Under Shipwrecked Moon – A Fable of Love, Death & Hedgehogs. Antero and Sylvi Alli's Vertical Pool Productions in the two preceding years introduced two other quality feature films, Tragos and Hysteria. But as is unfortunate with low budget film-makers, they've never received the wide circulation they deserve.Shipwrecked Moon is basically the story of Finland-born Esko Hietanen, who had disappeared under mysterious circumstances fifteen years before, leaving the lives of his family in disarray. He took the assets of the import-export firm he ran jointly with his brother Oscar Hietanen with him. The impetus for his leaving was the feeling of grief and guilt over the death of his only son Timo, a sea captain who was shipwrecked in the Bering Sea. He leaves Timo's grieving wife Rakel in wonderment and and anger as well as his doting young grandson Jari, who becomes a rock musician and a practicing shaman. Fireworks flare up when Esko returns home to the San Francisco Bay Area, unannounced from his long exile, to make amends to his family but dies before he can communicate with them.

The film is basically about the power, love and strength of family, no matter how dysfunctional it is. There is also a tender, sensitive love story between Jari and his young wife Madeline. There is realism, but also a touch of the surreal, dream states and mysticism in Shipwrecked Moon. A powerful force throughout is the enigmatic Sisu (played by Alli's wife Sylvi), who permeates the story with a mystical, shamanistic presence. In another sense she is also the young Saami female shaman who Esko was enamored by as a young man, and who died young.

In many ways, there are suggestions of a Kalevalan spirit throughout Shipwrecked Moon. Animal spirits seen as ravens and hedgehogs dance around on a giant chessboard. The cinematography is excellent, changing continually along with the moods of the story. This is not a megabucks Hollywood production, but who needs Disney when such fabulous work can be done with simple, basic camerawork and editing. Arranged by the talented Sylvi Alli, there is a rich musical soundtrack throughout the film, featuring her own unique rendition of Sibelius' Finlandia on the piano.

Berkeley-based indie filmmaker Antero Alli returns to his Finnish roots with his new feature "Under a Shipwrecked Moon," a handsomely produced but emotionally challenging avant-garde venture which will certainly provoke debate among Alli's fans.

"Under a Shipwrecked Moon" focuses on the journey of an elderly Finnish man who is planning to reunite with his family after leaving them 15 years earlier when his son, a ship's captain, drowned in a shipwreck in the Bering Sea. Unknown to the family is the true parentage of the dead son: the woman he believed to be as his mother was actually the midwife who delivered him when his real mother, a mysterious shaman (known in the Finnish tradition as a tietaja), died in childbirth. The midwife later married the child's father and pretended the child was hers. However, the shaman's mystical powers seem to have been inherited by the dead captain's son Jari, an American slacker who is uncertain if the increasingly bizarre visions he experiences while in a narcotized state are the result of his drug intake or another force.

The elderly man, however, unexpectedly suffers a stroke before his family reunion and is hospitalized. As his family gathers at his bedside to bring their own grievances for an airing, the comatose elder experiences a series of flashbacks, hallucinations and heavily symbolic imagery linked to the secret he's kept hidden for so many years.

Where "Under a Shipwrecked Moon" triumphs, however, is in Alli's extraordinary dream and hallucination sequences. Even by the high standards created by the filmmaker in his stunning recent films including the recent "Tragos" (2000) and "Hysteria" (2002), "Under a Shipwrecked Moon" takes the imagination into new and daring realms that few artists could ever aspire to conceive. Mixing the shaman traditions of Finland's folklore and heritage with psychedelic washes of color and daring theatrical experiments (two actors play the rivals of a raven and a hedgehog in elaborate costumes of the animals), and capping the visuals with a haunting score created and performed by his real-life collaborator Sylvi Alli (whose beautiful screen presence is used to its fullest as the shaman).

In presenting "Under a Shipwrecked Moon," Alli cites influences ranging from Cocteau, Fellini and Jodorowsky to David Lynch and Guy Maddin. This is actually unnecessary, as Alli's style and approach to film art is uniquely his own. Even if the human drama of "Under a Shipwrecked Moon" does not meet its fullest potential, the filmmaker's genius for framing challenging and provocative features cannot be denied.

THE CAST and THE CREW
Enormously Talented and Totally Unknown