1) “RIP WTO N30” (12:00); pickAxe productions, Eugene OR
This arrived at NOMAD one week after the Seattle 1999 WTO riots began. We immediately opened it up and viewed it like the smoking gun that it was. 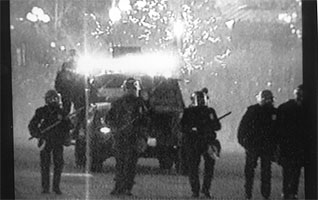 2) “PLEASE KILL MR. KINSKI” (9:00); David Schmoeller, L.A. CA
Over a hundred directors worked with the horror and the genius of film actor, Klaus Kinski but only one sent us a video document about his experience. 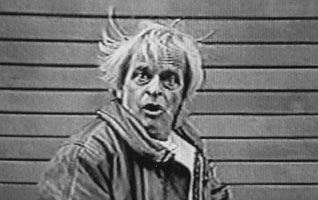 3) “CHUCK MAKES A WOODCUT” (7:30); Michael Houston & Joe Caterini. Brooklyn NY. This artist is a painter who sold his own work to fund this film about an artist making a painting to fund this...or, what are friends for ?

4) “COLUMBIA RIVER REDUX” (4:12); Michael Annus, Iowa City IA
Made from the old-fashioned jello mold of health, education and human welfare instructionals, a salutation to the migratory habits of an endangered species.

5) “THE FESTIVAL OF THE PUMPKIN” (3:10) Bart Woodstrup, DeKalb IL. Witness one of the last grand American traditions! Praise be to the harvest gods! Hail, Great Pumpkin in the Sky! Hail! Hail!!

6) “INTERVIEW #1” (12:00); Edgar Endress, Syracuse NY
A native Chilean drifts through the seedy underbelly of Pittsburgh searching for a real American to interview in this outsider-meets-insider story.

8) “THE INDIGO WISEMEN” (8:16); Paul Sullivan, NYC NY.
Is this a true story about four really average guys who sang for their supper ?
Or is this a hilarious hoax by four wise guys who just want to see their faces on the big screen of the NOMAD VIDEOFILM FESTIVAL ? Cast your votes now.

9) “MEDIA DARLING” (8:00); Thad Povey. S.F. CA
A macbre post-quake reflection on the American Media Machine as vampires in search of a bloody sound bite; filmed in S.F. after the 1989 earthquake.

10) “MY PERSONAL MESSAGES” (3:00); Sharri Weinberg, Scottsdale AZ. Through an intermittent narrative of answering machine messages, this media artist discloses some of the more quizzical quandaries of being queer. 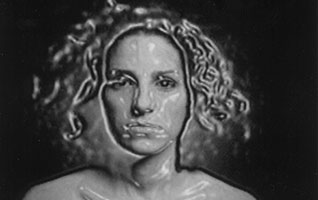 11) “DEALING WITH THE TRUTH” (8:30) William Zavala, S.F. CA.
Sometimes, truth is not what it seems. These modernday truthseekers found their questions answered and their answers questioned by a master used car salesman.

12) “LARRY” (26:00) Will Harding, Boulder CO.
Will Harding made this super fine, Super-8 documentary film about his own father and it broke our hearts in all the right places and why we broke our own rules (re: maximum submission running time; 20 minutes) to show it here.

Founded in 1992, this pacific coast touring venue (Seattle, Portland, San Francisco & other cities) features short experimental video/films favoring audacious work that risks strong personal belief in the subject matter. Curated by mediamakers Antero Alli and Sylvi Alli, the NVF is known for its subversive values and its fearless attention to originality. This year’s theme, "real & faux docs", explores docudramas, mocumentaries, docufictions and media hybrids mixing up the actual with the imaginal; all under 20 minutes! From almost 100 submissions worldwide, twelve works have been selected. Most of these videos and films are pacific coast premieres. You will see none of them on mainstream television or at your local cineplex. This two hour show includes an intermission where the audience is treated to a 10-minute live performance by the NOMAD MYSTERY PERFORMER, who is guarranteed to break video trance. Not recommended for children.