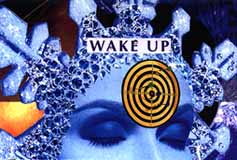 Astrological Mercury makes a good symbol for the the conceptual mind, the intellect, and its numerous functions and abilities. Of the intellect's many attributes is a unique capacity for forming mental images. Sometimes these pictures relate to real life events; other times they emerge as phantasms with no real life beyond the mind itself.

I believe that natal Mercury may give us some clues about our own image-making processes, specifically, where and how our own self-created images--of ourselves and the world--fall short and collide with the hard edges of existence and, where our images more clearly coincide with the way things actually are within and around us.

These two extremes of conceptual activity--of colliding into and/or coinciding with existence--represent an internal testing ground for what I'll call "image/reality discernment": the ability to know the difference between any given reality and one's image about it. The slang for this process is your bullshit detector, something I believe anyone studying and practicing astrology should learn to sharpen, hone, and continue to test if they plan to continue learning. (NOTE: Please let the word "image" be big enough to include anything the the conceptual mind creates: ideas, thoughts, concepts, fantasies, theories, opinions, pictures, etc.)

Indeed, all images constitute a symbolic reality. Like astrology itself, a symbol always refers to something greater than itself. For example, astrology symbolizes a way of organizing concepts of the vast human condition. Astrology, in and of itself, is not the vast human condition it represents nor will it ever become that. Confuse the symbolic for the real and you are chewing on the menu instead of the meal.

The word theory, from "theo" (Greek for "god"), literally means Ideas of God. The the conceptual mind does not create reality but images, or concepts, of reality. The conceptual mind interprets reality. When interpretations are confused for reality, they become dogmas. Astrological Mercury represents this symbol-making dynamic for making mental connections with inner and outer world by producing images. To know they are images and not the realities they attempt to reflect, however, is to begin an understanding of how the conceptual mind actually works.

In most natal charts, Mercury aspects at least one other force or planet. Without associating and comparing itself to anything, Mercury acts like a hungry mind inside an empty room. With nothing to do, it either goes insane or becomes enlightened. The state and quality of one's image-making mind can be determined by what or who it associates with. When your mind focuses on finding or creating meaningful connections with something, it tends to produce more meaningful images. When the mind spins out on meaningless pursuits, it tends to unravel more meaningless drivel.

To understand natal Mercury means to examine its specific aspects with other planets. Mercury aspects symbolize meaningful connections with given realities (symbolized by planets) that the conceptual mind attempts to interpret. Natal Mercury square Moon, for example, represents an ongoing intellectual struggle to translate emotional signals. Often with this square, concepts collide and conflict with our most personal needs and habits. If the Moon represents the existing states of one's biological and emotional priorities, the conceptual mind must learn how to develop images more receptive to the life of the body or else, produce mental confusion and emotional frustration.

Monkey Mind and the Mysterious Singularity

As in all astrological aspects, the direction of influence runs both ways. When we outgrow certain body-images, we can hopefully adjust those thoughts to befriend the body. The creature warms to a receptive intellect; the Moon bends to Mercury. Teaching the intellect to serve body wisdom is an uphill struggle in a society driven by the Descartean assumption that reason is inherently superior to instinct. Before an intellect can turn to its enveloping sheath for spiritual information it must be willing to live with, and not continually deny, two consistent truths:

1. The body is always in present time and
2. The body knows it's going to die.

To coincide one's attention with the body instigates your presence of mind. An intellect that realizes the concept of impermanence--that all bodies someday die--has already honed its bullshit detector far beyond the cultural norm, or average, and is ready for more reality.

Due to astronomical Mercury's close proximity with the Sun, many are born with natal Sun/Mercury conjunctions. At its most basic level, this represents an ongoing conceptual challenge for self-interpretation. Yet if the Sun symbolizes the very being of ourselves--the I-am-isness of who we are--then, how can a hungry intellect expect to explain that? It can't. This, however, doesn't stop the conceptual mind from trying. Mercury conjunct Sun makes a good symbol for what Buddhists call "monkey mind," that irritating capacity for over-identifying with your own thoughts.

Curious, intelligent people openly inquire about the source of their information whether it's their own or someone else's. When questioned about the validity of their ideas, or images, the Sun conjunct Mercury person may feel as if their very being is judged as suspect, or even defective. In actuality, only their information is (and should be) questioned; not their being. It seems to me that being exists beyond judgement by virtue of its genuinely mysterious and singular nature. You are absolutely unique (and so is everybody else).

Unfortunately, this lively paradox is rarely embodied in a society where far too few take the initiative to be completely themselves. Sadly enough and all too often, it's not until after our physical death that we are truly missed and appreciated for that patently unique expression given to our mysterious being.

Everybody Has a Bias

As much as we'd like to believe that we can be completely objective, it seems to me that the conceptual mind perceives through a cluster of psychological filters, conmmonly known as bias. A bias informs our point of view and expresses where we're coming from when talking, writing, or thinking. My experience throughout years of reading astrology charts and working in numerous group dynamics has been that most people don't know where they're coming from until they can admit their bias. To pretend you don't have one--to proceed as if your source of information comes pure and unfiltered--is a little like saying you don't have an asshole. Everybody has a bias.

Astrologically speaking, our conceptual bias can be read, in part, by studying the cluster of aspects shared with natal Mercury. When natal Mercury aspects Jupiter (beliefs and ethics) or Saturn (fears and commitments) or Uranus (autonomy and genius), the potential starts at birth to begin thinking, talking, and making sense of things in a certain way. With Jupiter, the bias is colored by a greater need to create meaning and purpose out of whatever experience we translate. With Saturn comes a pressure to conform to consensual, or socially-acceptable, definitions of reality before communication can be taken seriously; note the hard work and discipline that Saturn often symbolizes.

With Uranus, the conceptual mind races past consensual considerations towards creating its own logos, or language, for articulating intuitive impressions. What if natal Mercury aspects all of the above? (Uranus + Saturn + Jupiter) x Mercury = ??? One must be something of an alchemist to accurately interpret such a complex mix of forces contributing to this unique and potentially brilliant bias.

Let's apply our bullshit detector to this idea of bias. Mercury aspecting Venus represents, among other things, the need for developing imagery to convey the inherent beauty often overlooked in everyday experience. Here we find an aesthetic bias informing the perception at every turn. Yet to what extent have our innermost images of beauty been overwhelmed and replaced by the external barrage of sophisticated media and advertising aesthetics? Which images of beauty resonate deepest with the exquisite underlying reality (symbolized by Venus) and which are cheap, dimestore replicas? Image/reality discernment.

This notion of image/reality discernment acknowledges a distinction--between image and reality--that some of us may find difficult to grasp. Let me suggest that this distinction is not black and white--image or reality--but an uneven combination of the two. There is also a degree factor at work. For example, certain images around your experience of sexuality are going to cut closer to the underlying truth about sex than other images, especially those from outside sources. Individuals with Mercury/Pluto aspects, and in some instances Mercury/Mars aspects, may wrestle with the formation of thoughts around the role sexuality plays in their lives. Most of this struggle may come from trying to update their images to keep up with the ever-molting sexual realities transforming their lives. You don't have to have Mercury/Pluto aspects to be experiencing this of course, but those that do probably experience its accentuation.

The point here is not about doing away with images, which is ludicrous and impossible. Fine-tuning your bullshit detector means exercising more care and discernment about the images used to address and articulate the existing and relevant realities of our lives. What determines relevance and value? The harvest of your discernment.

This recalls the agricultural archetype of Virgo (Mercury) for sorting the grain from the chaff. Which images come closest to conveying the underlying reality that image attempts to represent? Which images in our lives have grown obsolete and desperately need an update? Which images are distorted lies and hallucinations that keep us deluded in a world gone mad?

If the study of natal Mercury can assist you in these important distinctions, congratulations. You have exalted the use of astrology as a tool for fine-tuning your bullshit detector, an important skill in any astrologer's toolbox. If you use astrology to confirm your own images of reality: good work. You are learning the language, yet are not quite ready for professional practice. When you can refer others to their own processes of finding and creating images to address their real-life quandries, then you are practicing the best kind of astrology and deserve to be paid handsomely for it.