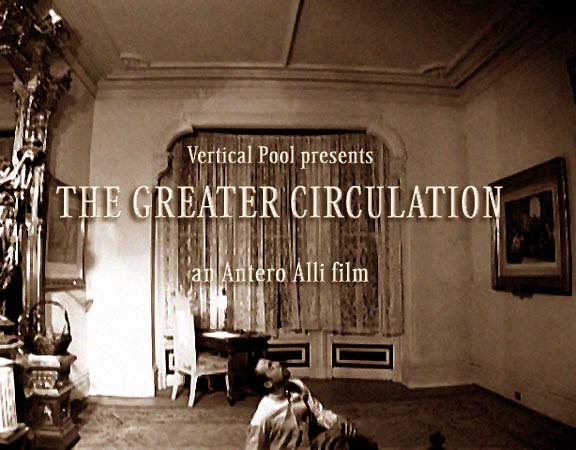 Film review by Phil Hall
for filmthreat.com 7 November 2005. (5 stars out of five)

THE GREATER CIRCULATION (2005; 93 min. USA)
Rainer Maria Rilke’s “Requiem for a Friend” (via the lyrical Stephen Mitchell translation) is the heart, soul and mind of “The Greater Circulation,” the new feature from the master underground filmmaker Antero Alli. The film has a deceptively simple concept: an experimental theater company in Berkeley, California, stages a performance ritual based on the poem, and during the course of rehearsals and production the impact of the poem comes to challenge and haunt the various people involved in this endeavor.

But beyond that concept is a deep, provocative and often disturbing drama which poses questions of love, art, mortality and grief with the grace and majesty of Rilke’s work. The poet himself figures in the film via flashbacks which recreate the physical and emotional circumstances behind “Requiem for a Friend.”

Rilke’s situation was one of great tragedy. His dear friend, the artist Paula Modersohn-Becker, died during childbirth. Rilke’s devastation over her passing was scarred by his inability to reconcile the manner in which she died – it was as if she threw away the iconoclastic triumphs of her work (which was not common in the early 20th century) to embrace the rigid traditions of motherhood. “Requiem for a Friend” poured out of Rilke over the course of three feverish days, when he was holed up in a claustrophobic Parisian hotel room. 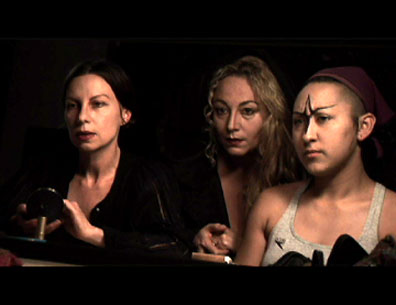 A century later, the aforementioned theater company, under the leadership of a seemingly evasive director (Lee Vogt), puts forth a staging of the Rilke play in an avant-garde manner. The theater is divided along the lines of a triptych and each section offers a window into the symbol of Rilke’s image of Paula Modersohn-Becker. The far ends of the triptych symbolize motherhood and art while the center panel finds a disturbed soul torn between the polar opposites at either side. A trio of hip actresses (Felecia Faulkner, Sylvi Alli and Leah Kahn) come in as the triptych women. Hovering on their periphery is an inquisitive drama critic and Rilke scholar (Lloyd Bricken), who wants to see what is going on with this unusual show. 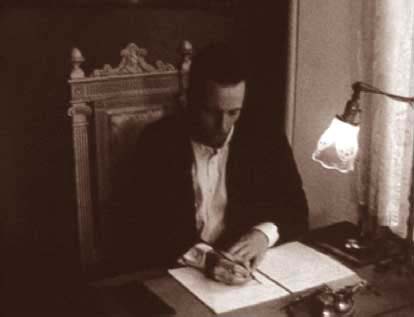 LLOYD BRICKEN as the poet, "Rilke"

The two periods crisscross each other, with the contemporary scenes shot in a crisp color videography while Rilke’s world is framed in sepia, with two brief computer generated animation interludes used with great imagination to explore the mania and misery which tortured the poet. Bricken is also cast as Rilke for the historic scenes, which is somewhat distracting at first (his contemporary character is clearly the anti-Rilke in his writing and sensitivity), but ultimately the dual role makes sense in the surprise ending.

Coming to terms with death is never an easy to approach, and Alli has already devoted several films to this tricky subject (including a short film also inspired by “Requiem for a Friend”). Yet the use of Rilke’s work as a vehicle for expressing the mix of emotions in losing a loved one provides astonishing responses throughout the film. The theater director’s embrace of Rilke is revealed through the recent loss of his wife, though his attempt to fasten onto a new muse via his theatrical efforts offers a disturbing sense of poor judgment. An unexpected death towards the end of the film leaves the central members of the cast uncertain how to face a sudden loss – through withdrawal or a show-must-go-on spirit? Even the nosy critic comes to term with an unlikely death: his own creative spirit, which perhaps was a stillborn but which roars back to life in an unexpected demand to stop viewing life and to begin living it.
' 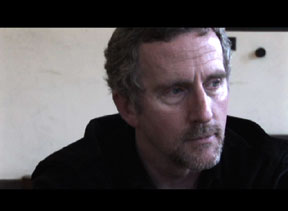 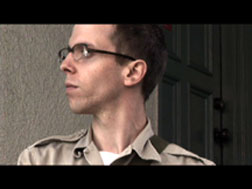 LEE VOGT as "The Director" and LLOYD BRICKEN as "The Critic"

The ensemble cast is magnificent, particularly Lee Vogt in a very difficult role (he says volumes with his tight, brief sentences and long silences), the ultra-cool Leah Kahn (who is perhaps the first woman I’ve ever seen who looks smashingly sexy with a Mohawk-style hairdo) and Sylvi Alli, the director’s reel-life and real-life collaborator. Sylvi Alli also contributed much of the film’s subtle score (both original works and piano interpretations of classical music) and she also created the paintings used for the staged performance.

Antero Alli is clearly one of the great treasures of today’s cinema. Not just the underground cinema, but cinema as a whole. “The Greater Circulation” is among his finest works. Anyone seeking lessons on how to create a wholly original work of motion picture genius can start here.